For our first play, we went to see “Jersey Boys,” which was just across the street from our hotel. The musical opened on Broadway in 2005. “Jersey Boys” is known as a jukebox musical with music by Bob Gaudio, lyrics by Bob Crewe, and book by Marshall Brickman and Rick Elice. It is presented in a documentary-style format that dramatizes the story of four young men from the wrong side of the tracks in New Jersey. The play takes you through theÂ  formation, success and eventual break-up of the 1960s rock ‘n roll group The Four Seasons.Â  “Jersey Boys” has the advantage of featuring singers that actually sound like the singers they are portraying and a technology-enhanced band that approximates the original sound of their music. Jersey Boys won four 2006 Tony Awards including Best Musical, and the 2009 Laurence Olivier Award for Best New Musical.

The sets are simple but eye-catching, featuring pop art designs, screen projections of New Jersey landscapes, and cool cameraman / TV viewer perspectives for sequences where the Seasons perform on American Bandstand. There’s also an ingenious backstage view for Walk Like A Man, where the guys stand with their backs to us, facing a black screen as flashing lights go off ( mimicking cameras from fans or press in a simulated audience, or maybe just lots and lots of stage spotlights ). 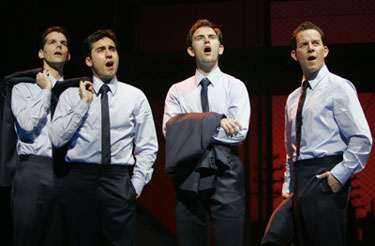