The Course , Nothing But Miles and Miles of Sand, Bataan Memorial Death March

From the start line (blue star at the South end of the map) the routes go counterclockwise. The numerically marked (1-12) blue drops indicate the water points. The red stars indicate medical stations.

On the 26.2 mile course, Steve and Rick did, proceeds Northwest from Water Point 4/8, circling a small mountain known as Mineral Hill. Returning to Water Station 4/8, marchers travel south along the paved road covered earlier in the route. The course then veers West along dirt and sand trails, coming up the backside of the White Sands community returning to the finish line.

The area known as the “Sand Pit,” featuring deep sand comes after Water Station 9. but, the dirt trails elsewhere along the route can be sandy and dusty as well. This is particularly true of the stretch between Water Station 1 and Water Station 3. 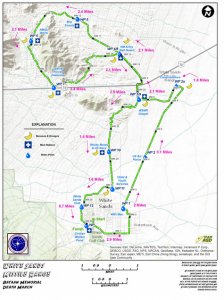 This is a map of the “staging” area for the march. We were surprised there was RV and camping sites very close to the starting point. It looked like this would be a great way to be on site so you would not have to contend with the incoming traffic the morning of the march. Also to be in the “thick” of things There was also limited indoor camping at the Community Center and rooms at the BOQ.

This is the information that was given out to the marchers before arrival so they could be well prepared for the march. “Since the march begins before sunup, the temperature will be cool at the start of the day. By 9 a.m. it will begin getting warmer and be relatively hot by noon. Light, layered clothing is a good idea. We highly recommend wearing a hat which provides shade to your head and neck, such as a â€œboonieâ€ hat. Bring and use sunscreen. Your face, neck and shoulders are especially vulnerable. Sweating will wash the sunscreen off, so reapply it frequently. Plan for the possibility of high winds with blowing dust. Include a bandanna and eye protection in your pack. Those with a history of reactive airway disease or pulmonary dysfunction should consult their physician before this event. Blowing dust may, in some cases, trigger acute respiratory events. Make sure to keep any prescribed medications needed in case of such an attack with you during the march. Itâ€™s a good idea to wear sunglasses. It is also a good idea to bring a pair of flip-flops for after the event as you may not be able to put your shoes back on.Â  Those who are driving to White Sands Missile Range by themselves, it is recommended you have a plan in the event you are medically evacuated on how you will get back to the Missile Range to pick up your vehicle. It is recommended that marchers plan on staying the night after the march as exhaustion will increase safety risks-falling asleep while driving, cramps while driving, blisters on the feet, etc.”

Steve and Rick took this information and prepared their packs with all the items plus body glide lubricant/Band Aid brand Blister blocks, baby wipes, electrolyte replacement tablets, rain poncho, nipple band aids, toilet paper and cash. This Cinch Sack was included in the registration packet to carry your supplies. The guys already had their Camelbak Mule Hydration Backpack for their water and other supplies so this bag became a souvenir.

The Bataan Memorial Death March is regarded by Marathon Guide as one of the top 30 marathons in the U.S.