Watch Out For The Slicer!!

We have a new slicer at our house. After dinner, Steve was drying the dishes and picked the slicer upâ€¦â€¦. 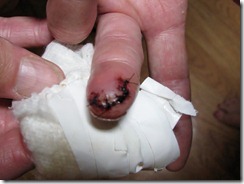 A trip to the ER and five stitches later his finger was sore for a few days. Since it was healing so well he thought heâ€™d hit his finger with a free flying bungee cord. It bleed for a while but we didnâ€™t have to go back to the ER. After seven days the stitches were taken out BUT they only took three outâ€¦the other two were no where to be found. Anyone need a slicer????